The Electric Piano: A Retro Sound That Has Stayed Cool

Electric pianos are similar in shape and feel to a normal piano.  The first notable difference is that they use pickups kind of like an electric guitar, in order to change vibrational string energy into electrical energy, where it is sent to an amplifier.

The first commercially available electric pianos were seen in the 1930s, although they were not prevalent in popular music until the 1950s.  Duke Ellington and Ray Charles were a couple of the pioneers of this instrument.

There are several types of electric pianos, and each type has its own sound. The first major type of electric piano is almost functionally identical to a normal piano, with the addition of an electric pickup. One example is the Yamaha CP70. The other types of electric pianos are a little more out of the box and produce sounds with very interesting personalities.  These include the Rhodes Style, Wurlitzer Style, and the Horner Style. Let’s look at each: 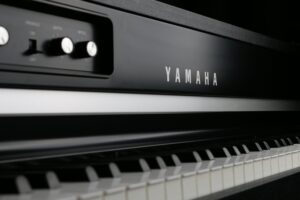 As stated, the Yamaha CP70 is structurally similar to a piano with the addition of electric pickups.  They sound very similar to a piano, with slight variations in overtones.  Most people including myself may hear one and mistake it for an acoustic piano.

However, there is a distinctive sound they produce when used with certain effects pedals, especially chorus or flange.  I have been a fan of this sound since I was a kid, although I had no idea how this sound was made.  The best way I can describe it is as a normal piano sound, but kind of cold, watery, and detuned.  Three examples that really stand out are Billy Joel, “My Life”, Hall and Oats “Kiss Is On My List,” and Toto’s “Hold the Line.”  I get a nostalgic feeling listening to the cold, chorused-out, or flanged-out sound of a Yamaha CP70. 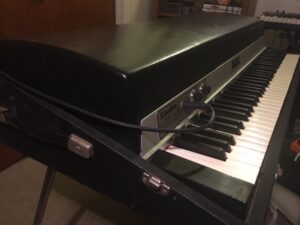 The Rhodes electric piano has an interesting history. The inventor, Harold Rhodes, was a piano teacher who ended up serving in the Army Air Corps during World War II.  In the service he wanted to continue giving piano lessons to fellow soldiers as well as entertain wounded and hospitalized airmen.  His first instrument was made out of parts he had available to him at the time, aluminum tubing from a B-17 bomb aircraft.  He refined and transformed it eventually creating his own company.  Fender bought out his company and began mass producing his instruments.

The Fender Rhodes Piano started showing up in popular music.  It has a sound related to a piano but with a “reedier” sound.  The highest notes on a Fender Rhodes remind me of a music box.  They sound especially beautiful when coupled with sustain.   Think of the intro to the Doors “Riders on the Storm.”   Other examples where the beautiful high notes of a Fender Rhodes can be heard include the 5 note backwards arpeggio featured on Hall and Oate’s "I Can’t Go For That," or sprinkled in throughout the Bee Gees “More Than a Woman.” The notes are beautiful and glossy sounding.  The attack is quick but smooth. The only way for me to describe it is to imagine droplets of melted wax hitting a tin roof.  Precise yet dreamy.

The midrange notes, on the other hand sound “reedy” and a bit hollowed out.  In the past I have mistaken mis to lower notes on a Fender Rhodes for a Fender Stratocaster with the toggle set to the neck pickup.  I can almost hear a vowel like “oooh” sound in the middle registers. If these notes are struck really hard, they can also produce a bit of a bite, or a growl.   A good example of Rhodes mid register notes is “Eye in the sky” by the Alan Parsons project.  Listen to the Rhodes used by Billy Preston in the Beatles “Get Back” for an example of Rhodes played hard, producing some bark.

The lower notes on a Rhodes produce a great bass sound.  In fact most of the Doors recordings were done with a Fender Rhodes Bass, which is a small electric keyboard featuring only the lower registers of a Rhodes.

Running a Rhodes through effects was also a common practice in the 70s and 80s.  Phase pedals are one effect which couples nicely with the Rhodes tone.  Some examples are Steely Dan’s “Peg” and “Deacon Blues” or Billy Joel’s “Just The Way You Are.”

Chorus also compliments the Rhodes nicely.  Just listen to Michael Macdonald's “I Keep Forgetting” / Warren G "Regulate," for an example of this.  The Rhodes has been used in countless genres, from Michael Jackson, to Madonna, Fleetwood Mac, Stevie Wonder, and even groups like Pearl Jam.

(To learn more about Effects such as Phase or Chorus,, read my post: Effects, the Unsung Heroes of Gear.)

How the Fender Rhodes Works

It is somewhat similar to the piano.  The keys are on a pendulum and there is a hammer at the end of the key.  But instead of striking a string the hammer strikes a small metal prong known as a tine. The tine vibrates, and a small electromagnetic pickup, just millimeters away from the end of the tine, turns vibrational energy into electrical energy which is sent to an amplifier.

The tines are connected to metal tuning forks of various lengths. Different tuning forks have sizes, which translate to different resonance frequencies.  The hammer strikes the tines directly, but the tuning forks are what determine the frequency at which the tines will vibrate.  Small springs are usually slipped over the ends of the tines. These little springs can be moved back and forth to further fine tune the note.

(To see the similarities to how a standard piano works, see my post on Pianos.) 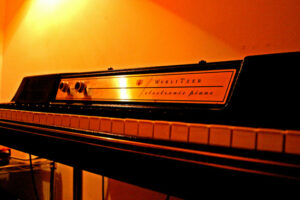 The Wurlitzer is very similar to the Rhodes, in how it works and sounds.  But the sound is even more distinctive and further deviates from the sound of a traditional piano. It is even “reedier” sounding than the Rhodes and is more likely to produce a growl as keys are struck hard.  I would say that while its sound can easily be confused for a Rhodes, it is generally less clean.  Listen to Marvin Gaye’s “I Heard It Through the Grapevine” for a quintessential example of a biting Wurlitzer, or a Wurli, as it is known in some circles.

A Wurlitzer can also be used with effects. The band Supertramp has a signature Wurlitzer sound through a chorus effect.  Listen to Supertramp's “The Logical Song” for an example of this.

I also hear the Wurlitzer in a lot of country music. It can add a very “tough” or “manly” element to a song, especially when played in mid to lower registers using blues scales.

How does the Wurlitzer Electric Piano Work?

As I mentioned, it is very similar to the Rhodes, but it sounds especially “reedy.”  Well, this makes sense, because the Wurlitzer uses actual reeds to get its sound.

It works like a Rhodes but the hammer strikes metal reeds, instead of tines.  There’s a small amount of solder at the end of each reed which determines the pitch at which it will vibrate.

The Wurlitzer also uses a pickup to convert these vibrations into an electric signal, although the Wurlitzer pickup works a bit differently.  Unlike the Rhodes pickup, or a guitar pickup, which are both electromagnetic, the Wurlitzer pickup is electrostatic.  This means it works on electrical charge and capacitance, as opposed to magnets and inductance.

There are a couple of different types of Hohners, but they work similarly to the Wurlitzer, although some use pickups similar to that of a Rhodes.  The sound is similar to a Wurlitzer but brighter with less sustain.  Listen to The Beatles “I am the Walrus” for a good example. The Beatles also used this instrument quite a bit on the Help album.

The 5 Keyboard Sounds You Should Know

Pianos: The Building Blocks Of Keyboards