Pianos: The Building Blocks Of Keyboards

Pianos were invented around the 1700s.  They work similarly to the clavinet, and the harpsichord, which had long been used before the piano.

I feel funny attempting to describe a piano’s sound since it is so prevalent.  The first way I think of describing a piano is to say “well, it sounds like a piano!”  It has a pretty quick attack usually and has a pretty crisp, clean tone.  You can hear it in the great classical works of Beethoven and Mozart, on Classic Rock tunes like the Doors “LA Woman,” and most of Billy Joel and Elton John’s songs.  It is used in Pop, Country, Hip Hop, and pretty much any genre you can think of.

Some Well Known Brands of Pianos 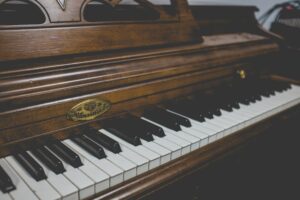 How Does a Piano Work?

They are similar to the clavinet and harpsichord in how they work.  In all of these instruments, a key on a pendulum strikes a metal string when the user’s side of the key is pushed down.  But in the case of a harpsichord, the key actually “picks” a string like a guitar when the key Is pushed, but I digress.

When a key is pushed, a hammer strikes a string at the same time that the damper releases from the string.  When the finger is taken off the key it returns to its original position with that hammer backed way off, and the damper resting on the string, silencing the note. 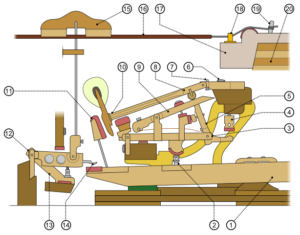 Number 1 points to the key.  Further to the right of this key is where the piano player will push the key down, rocking the left end upward.  The pink area at the left end of the key will lift 14, which pushes up the damper 15.  This allows the string 16 to vibrate.

At the same time, pushing the key has knocked the hammer shaft 10 up.  The q-tip looking head next to 10 is a felt covered hammer that hits the string 16. The string is now vibrating, and a note is heard.

Allowing notes to sustain can be a pretty effect, but if used too much, the notes may start to blend together and become indistinguishable.  For this reason, working the sustain pedal is kind of an art.

Sound of Piano with Foot on Sustain Pedal

Why Did I Write This Article?

What I really want to do is make sure you can distinguish between Different Keyboard Sounds in a song.  I think most people could identify a piano, but I didn’t want to leave it out, since it is so fundamental.

The electric piano sound, however, is one that not everybody can identify.  So, I will talk about it in depth in my next keyboards article.  See you then!

The Electric Piano: A Retro Sound That Has Stayed Cool

The 5 Keyboard Sounds You Should Know

1 thought on “Pianos: The Building Blocks Of Keyboards”